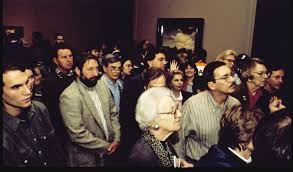 Every few months it seems that one of the bigger galleries/museums will hold a major – blockbuster – exhibition, covering an artist, a period or whatever. The dictionary definition of “blockbuster” is “an [event] that is a great commercial success”. Therein lies the key. Galleries need funds to keep going, most have free admission nowadays, so they put on something guaranteed to bring in the crowds, for which they can charge – and thus make money. It is not done to educate the public or bring to their attention wonderful paintings or artefacts, but to raise money.

But why do large exhibitions bring in the people? Several possible reasons might explain this. First, so that you can say you’ve seen a major exhibition – don’t despise this because we all like to impress others on our cultural activities and knowledge. This is particularly applicable, I suspect, to tourists (whether from the Midlands or Japan) who like to return home saying they have seen all the “important” events on offer. Secondly, those genuinely interested in the subject on show. Other more frivolous reasons abound: it’s cold/wet outside but nice and warm inside or our feet are tired with walking around London. A review may well have praised it to the skies, forgetting that the reviewer probably sees the exhibition at a special preview in the presence of few other people so does actually see what is there.

Let’s stop and think for moment. Why on earth do the above? Think of the downside: paying quite a large sum before you start having to queue or book for a time slot, so many people there that you can’t get close enough to look properly at anything (particular problem if you are short), and certainly not read the captions about each object, the wearisome knowledge that there are an unknown number of rooms before EXIT is reached, none of them exactly littered with something to sit on. The knowledge that it will take ages to get through the lot (and, if you want to go to the toilet, you won’t be allowed back in, so don’t have the much needed coffee before entering). Most of all, it is impossible to know whether the parts that are of most interest are near the beginning or further on when tiredness overtakes even the most ardent culture lover.

What does the average visitor come away with: an enhanced knowledge of an artist, a period, a desire to start at the beginning again or find a particular picture to re-examine (impossible because of the crowds of course)? No: exhaustion.

Right then, let’s think of an alternative – because there is one that works every time. The small exhibition holds so many advantages. Let’s try to list them and convert the tired blockbuster visitor to seeing something much more attractive and entertaining: it is usually possible to walk straight in, often for free, there is an absence of crowds so it is possible actually to see the objects on display, and probably only two or three rooms comprise the exhibition, so you can walk to the end, take a general view, then spend  time on the parts of main interest – without being hustled to move on. Unfortunately, there won’t be many seats here either but, because the exhibition is quite small, perhaps they are not needed so much. However the greatest thing of all is that each painting or other object can be examined carefully and closely and the caption read clearly.

Many people would find it easier and much more enjoyable to visit a small exhibition rather than a big one. Those with painful backs or difficulty standing or walking, those with only a short time to spend there, with only a mild interest in the subject on show or hoping the weather will clear up.

There are many varieties of small exhibition – being of limited size, it can adapt to content and space more easily than a big one. The National Portrait Gallery, for instance, might put on a display in one room about, say, the Brontës, so the visitor can easily learn a lot about them. The Foundling Museum may show some aspect of Handel (closely associated with the museum), for example his divas. Or perhaps a particular period is taken.

There is, too, a middle course to exhibition sizing, exemplified by the Royal Academy Sackler Gallery which comprises three or four rooms. Being part of the RA, it may be rather more crowded than other smaller ones, though probably not unduly so – but almost certainly not if there is a current blockbuster in the main rooms attracting the mob.

Have a go. You will love the small size, knowledge and interest a small exhibition will spark.

Tell us a bit about yourself (optional)
Please also choose a featured image to illustrate your article.
constant gallery goer
About the author